Scheduled for 15th to 19th June 2015, British Flowers Week was initially intended for the fresh flowers industry, but I think British dried flowers have something to celebrate too! 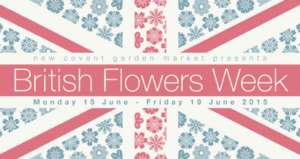 Dried flowers are becoming more and more popular, and the great thing is that many of them are British grown. We are so proud of our British selection at Daisyshop that we have given them their own British dried flowers showcase.

British Flowers Week is an annual celebration of seasonal UK flowers and foliage, aiming to spark public interest in where our flowers come from.

“Right now, British cut flowers are enjoying a resurgence in demand. Just as interest in locally-grown food has grown, so people are once again appreciating the value of locally-grown, freshly cut flowers.”

The same applies to dried flowers. At Daisyshop we support at least six British growers, a couple of which we have been in communication with since their inception. Often they are farmers looking to survive by diversification. Flowers and grasses are grown as a crop, with bunches hung to dry in farm buildings on site, before being boxed up and sold on to us for retail. UK flowers are being grown and dried in farms across Britain. But this is not a first: lavender was widely grown as crop throughout Britain, right up until the First World War.

Like many florists, I am happy to admit that there are many products in our shop which are not British grown. We stock a mix of items, some of which are just not available in the UK. But we always source flowers from the UK first, our requirements being availability, quality, and value for money. In order to extend our offering, I am working on a range of UK flowers such as gypsophila, which are bought in fresh from British growers and dried on our own premises.

Dried flowers are an intelligent choice for weddings: they can be organised well in advance; they will pack in a suitcase for weddings abroad, and can be kept as a memento afterwards. Now there is such a great selection of British bunches, the choice is limitless.

And don’t forget confetti petals! Dried flower petals are a necessity at many venues these days, being readily biodegradable. Choose dried delphinium petals and you will be once again supporting British growers!

If you enjoy cardmaking, you may be interested in sourcing pressed flowers. There are a few British businesses out there producing these. Do choose British pressed flowers rather than cheap Chinese imports which are often dyed garish colours to boot! At Daisyshop we source ours from a British lady who presses a selection of flowers grown in her garden.

If you visit our British Showcase page at Daisyshop, you will find British dried flower bouquets, and bunches for making your own. Traditional wheat sheaves and lucky heather, as well as dried lavender bunches. There are lavender grains and Kentish hops for making lavender bags and relaxing sleep pillows. You will find pretty confetti petals, and a wide range of pressed flowers.

Join in the conversation at #BritishFlowersWeek